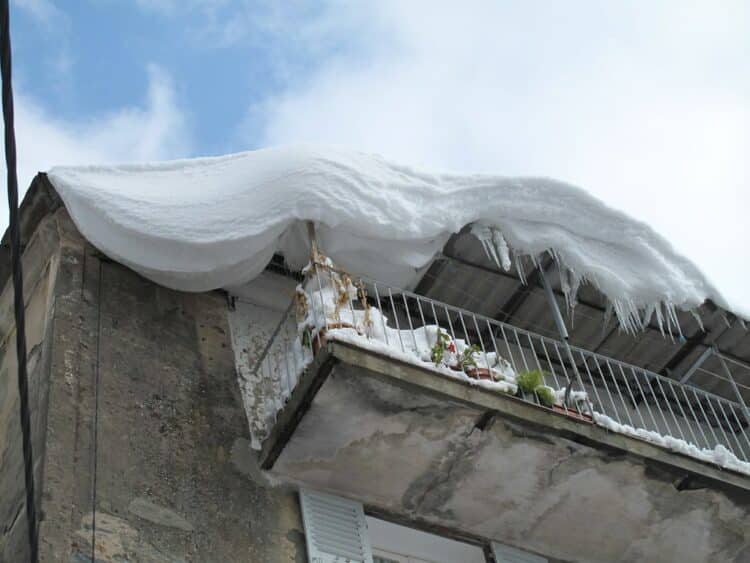 When the winter season kicks in, clearing snow around your house becomes a necessary task. You clear the driveway so that you can get to your car. You shovel the sidewalk so that you can walk your dog or take out the trash. What about the roof? Is it worth the effort? “Should I remove the snow from my roof?” you ask yourself.

To get the answers to that question, stay with me. This article will highlight why and when you should remove snow from your roof and the right ways to do it.

Should I remove snow from my roof?

When snow settles on your roof and accumulates, it can damage the roofing materials. Better yet, it can weigh so much on the roof and cause a cave-in. Roof snow can also create ice dams that leak and damage parts of your roof.

Why clear snow off roof?

It is necessary to remove snow from your roof for these reasons:

Ice dams are sharp rims of ice created at the edge of a roof. They form an obstacle that blocks the melting snow from draining into the gutters. When heat from the house hits the upper parts of the roof, the snow in these parts melts and flows downwards.

Since the roof edges are colder, the snow freezes again and forms a belt of ice. As more snow melts and refreezes, a taller ridge of ice forms. Ice dams can block the flow of melting snow. The moisture finds its way to roof parts such as shingles and causes damage. Wetness will also cause decay of roofing material and plaster.

Heavy snow can collapse the roof

Snow may seem fluffy and light, but when it builds up over time, the weight can overwhelm your roof. The heavier and wet snow is worse. A small blanket of this type of snow may seem harmless to the eyes, but it weighs down on your roof in a real sense.

Snow may melt and leak into the house

When snow accumulates on the roof, some may melt, leak into the house and damage your valuable things.

Obstruction of vents, ventilations and other conduits

If snow stays on the roof, it can obstruct critical pathways within your house. These include chimneys, gutters, and vents. The wind can blow snow into ventilations where the snow will clump together and form a large ice mass.

When should you clean snow off your roof?

Light snowfall and a thin layer of powdery snow on your roof are not a cause for alarm. You better leave it to melt on its own or get blown by the wind. However, the following signs should convince you to clear snow from your roof

A roof that looks like it’s about to cave in is a clear sign that the weight of the snow is exerting excess pressure on your roof.

Windows and doors are hard to close and open

Check to see if the doors and windows inside your house are opening and closing normally. If you notice some resistance, the roof might be exerting pressure on them. This should tell you it’s time to ease out the snow from the roof.

Crevices on doors and walls

If you notice a crack on the wall, especially near the door frame, it is a sign that the roof is becoming heavy on the doors.

If your roof is producing tired and squeaking sounds, you should clear snow off your roof right away or consult a professional snow remover.

Depending on your roof’s state and the amount of snow, you may hire a professional snow remover or do the cleaning yourself. If you choose to work on your roof yourself, here are several ways to do so:

One of the best ways to get the snow off the roof is using a rake. A good rake has a long pole and comes with extra poles that you can add to lengthen it. Make sure to take caution as the falling snow may injure you, nearby people, or pets.

How to rake snow off your roof

Experts recommend raking snow with your feet firm on the ground. Most rakes have extension poles to reach the farther parts of your roof. Position yourself in a way that leaves some space where the falling snow will land. Also, wear protective attire such as goggles, gloves, boots, and a helmet.

Start working on the snow nearest to the edge, work in small bites, and proceed towards the distant parts. As you pull the chunks, look out for passing pets and other household items.

This is a common DIY hack for slanted roofs. It is suitable for short houses of one story. You use a long rope that goes over the snow mass and sweeps it down the roof.

Fold the rope and throw the middle part over the snow. Once the rope has its grip on the snow, pull both ends of your rope towards you. Make sure to keep a safe distance from the roof to avoid getting hit by falling chunks of ice.

You will need to use a ladder to put the rope across the snow pile for a taller building. Wrap one end of your rope around a heavy object, for instance, a stone. Place a ladder firmly on the ground and lean it on the roof.

Carefully holding the other end of your rope, ascend the ladder, and wrap the rope around the edges of the snow mass. Climb down the ladder and pull both ends of the rope. If the load is too heavy, look for someone to pull one end of the rope as you handle the other end. Continue until you have cleared the snow to your satisfaction.

If you thought your shovel is only for ground surfaces such as sidewalks, you are mistaken. You can clear snow from your rooftops using a shovel. This is a high-risk technique, and you should wear protective gear and non-slip boots before ascending that ladder.

This technique is the best way to remove snow from a flat roof.

How to shovel snow from the roof

Place your ladder firmly on the ground and lean it on the edge of the roof. Hold the shovel in one hand and ascend the ladder carefully. Start from the farthest end of the roof as you work towards the ladder.

Leave about 3-feet of snow at the edge to cushion you from falling. Clear the cushioning ice last.

Like the rope, you wrap the wire around snow and pull down to remove snow from the roof. This technique is best for steep roofs. Compared to the rope method, the wire technique is more stable and cuts heavier snow.

However, this method is more demanding. You might want to ask another person to hold down one end of the wire.

Fold the wire and place the middle part of the bend on the edges of the snow. Position yourself a little distance away from the roof and pull both ends of the wire. This movement will drag the snow away from the roof. Continue with the same process until you have cleared the snow to your liking.

This is a recent development on roof snow removal methods. You apply high-pressure steam on piles of snow. The heat and pressure melt the snow, which flows down like rain away from the roof. Steamers are a good fit for the removal of ice dams on most roofs.

The only downside of this method is that it needs the application of hot water. The hot water can harm Photovoltaic solar modules on the roof.