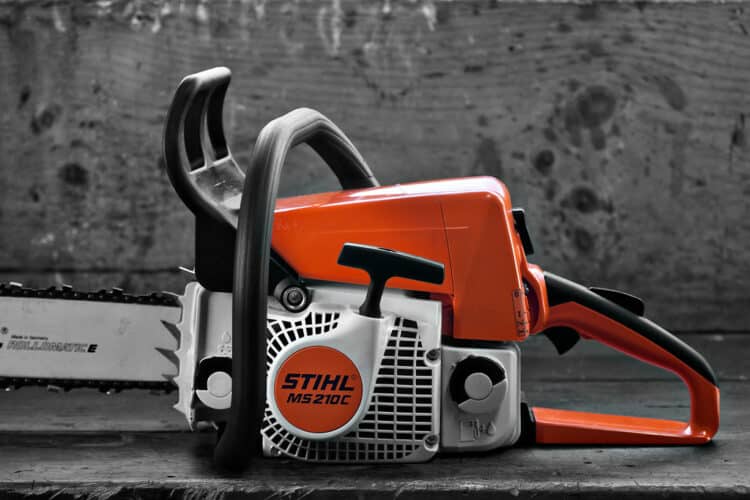 There are many head-scratching reasons why a chainsaw starts and dies. And you, as a casual user, wouldn’t know how to fix it.

A chainsaw is a complicated piece of machinery that you have to know how to operate. It also has an element of danger that can result in grievous harm or even death.

Therefore, you have to be familiar with its many parts, like how to use it properly and its many malfunctions.

Soon, you will learn the answer to the question: why won’t my chainsaw start?

Some parts of its components have passed the OSHA (Occupational Safety and Health Administration) requirements. It has safety measures installed to enable its application to be low risk.

Here are the chainsaw’s parts, and some have OSHA mandated specifications:

Why does my chainsaw start and dies? A chainsaw troubleshooting guide

If your chainsaw often sputters and stops all of a sudden, instead of letting out a proper high-frequency noise whenever you push the throttle trigger, something is meddling with the engine’s fuel combustion.

The issues might be a defective spark plug or simply lacking air in the system. You don’t have any difficulty in checking those and can immediately fix it.

Yet if the problem comes from fuel composition or delivery, it will be a little harder and complex.

Here are some common chainsaw issues from its different parts:

A typical chainsaw has two filters that have different functions each. One is hindering dirt and debris from coming into the fuel line and the other for regulating the air circulation.

Outside air comes into the filter through the spark arrestor. And whenever the air filter becomes grimy, it will block the air from circulating and stalls the engine.

The filter is situated below the engine housing cover. While the spark arrestor is located between the muffler and the exhaust port.

You can remove both components easily and have them fixed. A dingy filer limits air current and also makes the engine cease to function.

Meanwhile, the filter for the fuel is situated in the gas tank, which you can remove and replace easily.

There are many chainsaw air leak symptoms, and some of them come from fuel issues.

If your chainsaw has been stored on a garage shelf for a while, its fuel might need replacement. Gas left unused and stagnating in the saw’s carburetor, and the fuel line will partially evaporate. There will be a residue remaining that looks like varnish that will congest the fuel line.

The gasoline might have water due to moisture, which will settle in the tank’s bottom close to the fuel line. The water and gas mixture will then clog it and cause harm to the engine.

Once you let out all the old fuel, take apart the fuel line and apply generously with an effective carburetor cleaner to break apart and dissolve the deposits.

Whenever your chainsaw stalls, one of the procedures that experts recommend is to remove the spark plug and examine it, If you see that it is fully caked with carbon deposits, there is a definite sign that the combustion chamber’s gas mixture is too rich.

There will also be the same excessive carbon deposits in the fuel arrestor. Some newer chainsaw models have a control feature in the form of adjustments screws. They function by controlling the fuel amount that the carburetor spray to the combustion chamber by adjusting the screws.

If the saw engine suddenly ceases while in idle speed, the screw to adjust it has to be tightened. If the engine does not keep on stalling until you press down the throttle, you make the screw tight for either a high or low-speed screw to make a better performance.

If you leave gas in the carburetor during wintertime, it will become pasty and clog the engine. A carburetor kit will be able to fix this issue. If it persists, then contact a professional to have it fixed.

A grimy spark plug will still enable the chainsaw engine to switch on but will die instantly. A particular plug will be deemed dirty if the insulator nose situated at the firing tip will be caked with carbon, gas, or oil.

The caked substances will enable electrical voltage to course through the insulator nose, percolate back to the metal shell, and become grounded, instead of providing a bridge for the gap and igniting normally.

If the carburetor is improperly adjusted, it will lead to a too-rich fuel mixture, Thus fouling up the spark plug. If it’s too far gone and cannot be made clean, you have to substitute it, which will fix the problem.

The fuel lines’ chief function is to enable the flow of gas going to the carburetor from the fuel tank. Whenever it gets busted or cracked, it will result to fuel seepage that hinders it from coming into the engine.

If there isn’t a single droplet left in the fuel tank, the engine can still start but will immediately stop. Gasoline leaking out will become a fire hazard, so it is very crucial to substitute it instantly if you see a cut on it.

Any cut or crack will be very apparent, so you won’t have a difficult time seeing one. If you don’t notice a gash and still the engine stalls, then there may be something blocking the lines.

You can remove thee to see if there’s any obstruction by blowing through like a massive straw.

You can also replace it by unfastening the lines connected to the carburetor. And also the fuel filter and installing a new one.

If carburetor adjustment or filter replacement didn’t amend the performance of your chainsaw, you have to do it a different way.

With the carburetor, you may need to remove, disassemble and clean it with a carburetor cleaner. You will need a carburetor kit for this, which you can purchase in any hardware store.

If you don’t want to clean it, you can also just replace it, since the whole process is a painstaking task to do. If that still won’t fix the issue, then you have to get it fixed by a professional.

Engine stalling can originate from some malfunction of the moving components within the engine or worn-out crankcase seals. These may be due to impairment from wear and tear or not enough lubrication.

A carb kit is very effective in keeping the carburetor clean and in great shape.

Whenever the carburetor gets dirty or gummed up, utilizing the carb kit to clean it will enable fuel to flow freely again and make the chainsaw cut speedily.

If the fix necessitates you to rebuild the carburetor, experts recommend taking pictures with each step taken. It will ensure the proper placement of each part to make reassembling quicker.

Now, with your newfound knowledge about the chainsaw and its main components, you know what to look for if it starts and dies immediately.

Lastly, a word of caution: be careful always in dealing with potentially dangerous equipment. You don’t want to accidentally cut yourself with a chainsaw, which has the potential to go very bad.