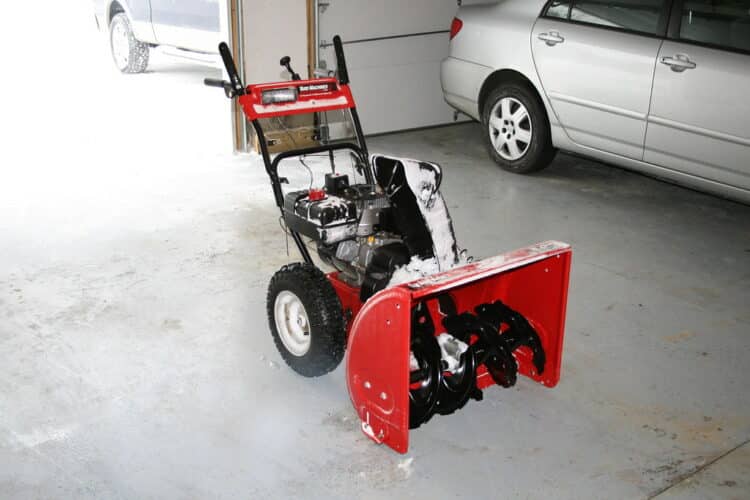 It hurts and annoys at the same time! You grab your snowblower, ready to clear the snow outdoor. And when you press the start button, the engine starts but snowblower wont stay running at full throttle.

You then start wondering where the problem is. Ultimately, how can you solve the issue and get to your snow plowing business in no time?

This guide will help you spot the problem and use the correct part to replace it.

Certain defective parts cause this problem in your snowblower. They include:

Before you start working on your snowblower, pull the spark plug wire off. Besides, remember to empty the fuel tank from the gas source.

Learn how to resolve snowblower engine stall due to the following defective parts:

The carburetor is a vital component in a snowblower. It mixes the fuel and air to create a proper mix for perfect combustion.

If the air/fuel mixture is incorrect, then the engine will not run well. Sometimes, it may not start and run at all.

Another reason could be the blockage of the carburetor. That often happens if you leave fuel in the snowblower’s tank for a lengthy period.

This is what happens:

Some of the fuel’s ingredients may evaporate over time. This may leave a thicker and stickier substance behind. So, the damp fuel may block the carburetor and restrict the engine from running.

How to fix a clogged carburetor

If you want to service and reassemble your carburetor, follow the steps below:

Identify the carburetor beneath the air filter. Then detach the air cleaner cap. Check for any obstructions that could block airflow and limit air supply to the engine.

Check if there are any adjustment screws. Adjusting the setup can sometimes help clean out fuel flow and solve the issue.

Spot the two idle screws on the carburetor. You’ll often see one marked as L (low) and the other labeled H (high). Turn both screws in to cut off the fuel supply.

After that, loosen the screws by two-full-rotations and start the engine. It may not run very well. The thing is, the engine should ignite at such carburetor settings.

Allow the engine to run for about five minutes. This helps to bring it back to its operating temperature.

Then, turn the L screw in a clockwise direction to add enough fuel to the set idle. At full throttle, also turn the H screw clockwise for a high idle setting.

Suppose the engine starts running well; good news for you. You can now begin clearing snow from your driveway.

But, you should have some experience with this fix. Thus, you’ll need to make several tries to do it well.

Some snowblower models tend to have fixed carburetors. Hence, they don’t have adjustments. So, be sure to check that out first.

How to replace a carburetor

Does the snowblower wont stay running after trying to fix the carburetor? Well, it means that you have to replace it.

Thankfully, a carburetor kit comes with everything you need to fix the carburetor.

It offers an excellent way to improve your carburetor’s lifespan. That’s because it helps bring the carburetor to a new condition. This will help keep the engine running flawlessly.

When replacing the carburetor, be sure to take photos of all the parts as you disassemble it. This will help you know where exactly they belong. Thus, simplifies the process of reassembling the parts.

Moreover, lay all the parts in order of removal to make reinstallation easier.

That said, let’s replace the carburetor in your snowblower:

Install the new emulsion tube and main jet. Secure these parts and press the metering plug firmly in place.

Next, screw back the throttle stop until it’s 1/16 inch out on the other side. Place the new spring onto the needle valve and put it into the new float.

Reinstall the gasket and carburetor onto the engine. Then connect the fuel line to the throttle cable and un-pinch the fuel line.

Reattach the housing cover for the knobs, primer bulb, and switches. Plus, ensure everything sits back pretty well.

Finally, reinstall the shrouds, covers, and handlebar. Try starting the snowblower and see if it runs well.

This part handles the air/fuel mixture flowing into the combustion chamber. Check for any signs of damage or wear.

Do you see a cracked porcelain insulator? Or is the amount of carbon buildup on the electrode higher? If yes, replace it. You can use the spark plug tester to tell if the spark plug is faulty.

A powerful spark between the tester’s terminals shows that the engine is moving well.

If you don’t see the spark, then know that the spark plug is defective. Therefore, it needs replacement.

The springs exist on the carburetor and enable the proper functioning of the valves. Any damage to this part could cause engine malfunction in your snowblower.

Inspect for any missing, broken, or poorly installed spring. That’s because such a spring could affect the carburetor’s functioning.

Be sure to double-check the user manual for a proper spring fix. And make sure you install them correctly and replace the missing, broken, or weak springs.

As the snow blower’s engine consumes fuel, the fuel level in the tank reduces. Thus, a fuel cap delivers air into the tank through a small vent.

A clogged fuel cap vent tends to restrict air from entering the tank. This causes a vacuum, often referred to as vapor lock. And this blocks efficient fuel flow to the carburetor, making the engine stop running.

To know if this vent has clogged, loosen the cap slightly and ignite the engine. If the engine keeps on running, then it’s likely blocked and needs replacing.

Clogging of the filter limits fuel supply to the engine at full throttle. Be sure to check the fuel filter’s condition by twisting off both ends of the fuel line and blow air through it.

If you notice that it’s blocked, know that it’s time to replace it.

The gasket seals the linkage between your snow blower and the carburetor. This means that it prevents air and fluids from seeping into the wrong places.

A destroyed gasket lying below the carburetor tends to pull excess air into the engine. This causes an incorrect air-fuel mixture, making the engine stop running.

You can remove the air filter and loosen carburetor screws. After getting the gasket out, check signs for tears, rips, or other signs of leaks. Regardless of how severe the damage is, make sure you replace the gasket.

The needle valve in the carburetor controls the fuel amount entering the carburetor. It’s always impossible for a tiny debris particle to find its way inside the needle.

If it does, the fuel flow gets disrupted. Hence the snowblower wont stays running. You can use the carburetor kit to resolve the problem.

We may, at times, overfill the engine oil. This may cause the oil to leak via the air filter and find its way inside the carburetor.

In such a case, you’ll need to remove the carburetor and clean it well. After that, ensure there’s a proper oil level in the engine.

Engine malfunction is a common thing caused by either a defective part or fuel used. If your snowblower wont stays running, know that it’s something fixable.

That said, be sure to follow our guide above whenever you face such a problem with your snowblower. Regardless of the part damaged, the steps highlighted will guide you properly. And you can get your snow plowing tool running again.