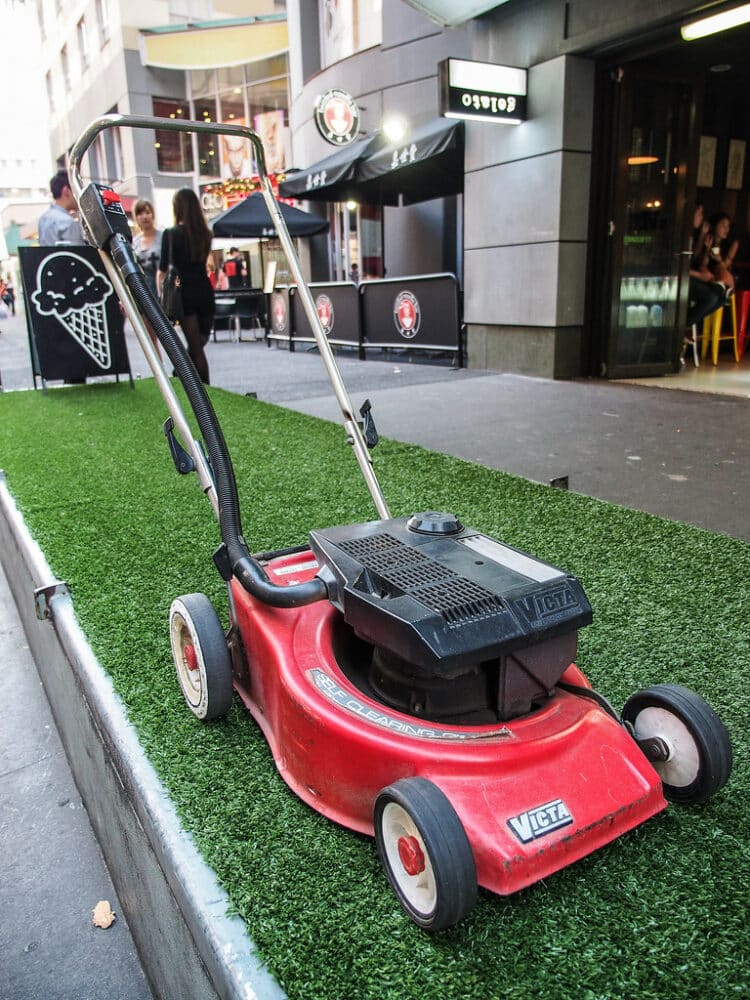 Are you losing your nerve and have reached this point in asking yourself why my lawnmower wont start?

If you’re having lawn mower problems, it’s not the end of the world. With a couple of troubleshooting steps, you can fix it to be good as new.

The cold months are finally over, and spring has sprung. Your lawn grass is beginning to grow into a thick, lustrous green. You want to keep it in its present state, which means you have to trim it constantly with your trusty lawnmower.

Regrettably, the mower doesn’t seem to function. The engine looks to be dead as a doornail. What do you do?

The most common engine problems originate from either an issue with the carburetor or fuel or perhaps something else. But eighty percent of the time, those two are the main reasons why it doesn’t start.

There are ways to fix it. But you need gather tools and materials first:

You might need to go engine parts store to get some of the necessary components.

Before beginning to work on your mower, follow some safety measures first.

Firstly, to avoid lawn mower fuel problems, it’s important to take note that whenever working on either small or large engines that are powered by fuel, petrol, or gasoline, these are flammable, volatile, and very dangerous.

Get rid of all potentially dangerous materials that might initiate combustion like cigarettes, naked fire, open stovetops, or any hot items in the immediate vicinity.

Proper ventilation will also keep potential vapor buildup from happening. Remove any rags dampened with gasoline lying around that might cause ignition.

Before beginning to work on the engine’s underside, take out the spark plug or unplug the lead. Be sure the controls are switched off, and its engine has cooled down (if you were able to start it earlier).

If you’re going to turn the blade manually, be sure that the spark plug is removed to be safe. It’s theoretically possible that even a disconnected plug and a cylinder still full of gas and the vapor can cause an explosion once piston-compressed.

The same thing will happen if the blade is turned while fixing the mower’s underside. Although the engine is off, the turning blade will kickstart it as the blade is spinning.

Not only a possible explosion could happen, but the spinning blade can sever your fingers of the whole hand.

Even though it is unlikely to happen, you still need to remove the spark plug. It is to prevent those from occurring and will also serve as a vent for the cylinder.

Go through your mower’s user’s manual to find out how it should be inclined to the side for cleaning the deck, removing the deck, or changing the oil. Some mower manufacturers will recommend keeping the carburetor to point up always.

Also, the spark plug should be settled upwards, with the handles angled back towards the ground (you will need a heavy object like a cement block to set the mower in this placement).

Leave the mower in that position, and don’t turn it. So that the air filter and carburetor are facing down. It’s because the engine oil can defile the filter and carb, which will make it difficult for the engine to start.

If you estimate that the fuel capacity will reach the cap, drain the fuel from the tank. It’s because the cap has a small vent, and its fuel source can drip out through it.

If the mower is equipped with a fuel tap, switch it off. If the mower has to be situated on its side or the spark plug facing up, let the engine run until it cuts out.

Some small engines have a float bowl with an overflow mechanism, and fuel can drip into it. The bowl might not function properly if the engine is not horizontally positioned, which might cause the carburetor to brim over into the engine’s intake manifold.

If gas leaks outside while the engine is still hot, there is a risk that flames might ignite. If the mower only has to be elevated a little to decongest the deck, you do not have to switch off the fuel or deplete the tank, yet you still have to unplug the plug lead.

After the winter season has passed and springtime has arrived, your lawn has started to develop into a thick sod. It now needs to be mowed. You have to do this to keep it healthy and neat looking.

However, your handy lawn mower won’t start after winter, and the reel mower blades won’t turn. Whenever this occurs, the carburetor is the likely culprit. It’s one of the most common lawn mower problems. Here’s how to fix it:

Step one: Check on the carburetor bowl

You have to remove the bowl from the engine. Put a small cup below it first. So that once you take it out, the spillage will be caught.

Take out the proper socket from the set to loosen up the bowl nut. Once the nut has been loosened, you can unscrew it out with your fingers. Then lower the bowl to let all the gas spill out.

Step two: Take out the seat and inlet needle

Your mower problem is almost over. Before getting to the endgame, pull out the float pin. Its attachments like the retaining spring, float, and inlet needle might pop out, so be sure to catch it.

Using a small pick, take out the rubber seat. Since you have a new inlet needle and seat, you can attach them back in reverse.

Step three: Check on the condition of the carburetor

Analyze the entire state of the carburetor. If you notice that there is a power-like corrosive material everywhere, you can either replace it with a new one or clean it up (go to the next step).

The whole cleaning process would entail boiling the whole dismantled carburetor for thirty minutes in a vinegar-based solution. The corrosive material will be gone, but some pitting will remain.

If the inlet needle is stuck or the fuel filter is still plugged, the engine won’t be able to get gas. If the mower is equipped with a fuel filter, take out the fuel line first.

The gas should spill out. If nothing happens, take out the fuel line close the filter inlet. If gas pours out, then the filter is still clogged, which means you have to substitute it.

If there’s still not gas, the line might be crimped or blocked. Look within the tank if there is debris that might back up the outlet.

If you can get gas to the carburetor, look if the bowl has fuel inside. Use a C-clamp to clamp off the fuel line. Then take out the bowl.

If there’s nothing in the bowl, the issue is with the seat and inlet that’s stuck. It’s not hard to replace it and not expensive to buy.

Before you start buying new parts, observe the condition of the interior of the carburetor. You can either boil it in vinegar (as mentioned above) or simply replace it.

Unscrew the carburetor bowl nut. Slip in the carburetor cleaner straw into the jet passageway and press the knob on the can to shoot out the cleaner liquid into the venture.

A congested jet is a common carburetor issue. If cleaning it still won’t start the engine, then you have to substitute the carburetor.

If you were able to get the engine to start by cleaning the jet, but it still operates roughly and has speed surges, you can either rebuild the carburetor or replace it.

Rebuilding it will entail particular mechanical expertise, so your only other option is to substitute it.

At this stage, you already know how a lawnmower works and know how to troubleshoot a corroded carburetor, which is the most likely malfunction whenever a mower won’t start.

But do you know how the proper procedure to start a conventional mower? Here’s how:

Fill the tank with gas

The first thing you need to do is fill up your mower tank with gas. Use a funnel so that you won’t spill gasoline over the engine.

If the engine is hot, wait for it to cool down to pour in fuel, since spilled gas could ignite a hot engine.

Check on the oil level

Old fuel inside your mower’s gas tank can make engine starting difficult. Fuel with a percentage of ethanol can draw in moisture, which causes corrosion.

Evaporating fuel will leave varnish, gel, or gum deposits that can congest or bind moving components together. To avoid this, use a fuel stabilizer to enable the gas to still be fresh throughout storage.

After the mower has been operating for a while with the new gas and stabilizer, you can pour in the old fuel a small portion at a time during the entire mowing season.

Throttle control has to be in full revs

Engines have a choke device that acts as a way to block air intake. It enables the fuel vapor is drawn in to be saturated and richer and assists in starting the motor.

Others mowers have an automatic choke that shuts off as the engine operates for a couple of seconds. Still, others have their throttles set to a choke position that switches on the choke device.

As the engine starts, the throttle control reverts to the run setting. Still, other mowers have a manual choke that has to be turned on. There is a small pry bar that you can slide into position.

Pull out the starter rope until you feel something resisting

Let the starter rope return to its position, then sharply pull it. Repeat the procedure until the engine starts, but don’t do it more than four times.

Do this if the engine hasn’t started yet. Also, try pulling the starter cord a few times more. If it still won’t start, it may be flooded, so let it be and wait for the gas to evaporate.

Switch off the choke after the engine has started

Switch also the throttle from the start position to run.

After doing all the steps and you still cannot get it started, perhaps it time to purchase a new one.

You can either choose from either electric, gas, or battery-powered.

Or the newest type to hit the market, which is solar-powered robotic lawn power. It functions like a Roomba, but with grass instead of a carpet.

Now, you already know what to look for whenever your lawnmower malfunctions. If you have basic mechanical still and with the right tools and materials, you can fix them in one hour, with no sweat at all.