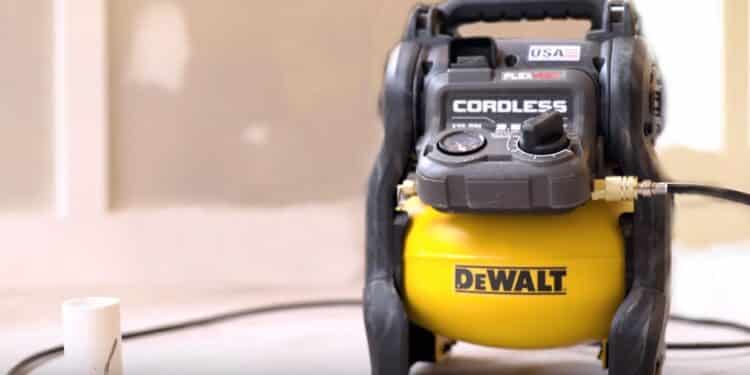 A lot of air compressors available in the market today have capacitors as one of their components. What exactly is it concerning the compressor?

The air compressor start capacitor is a crucial part of the overall pressurization system. It is located on the outside of the motor and encases in a metal covering, close to the end shaft.

It is specially created with two metal plates that have insulation in between called a dielectric. They have the same purpose as batteries because they store power.

It is chiefly there to facilitate the motor to start running. If there is a run capacitor as well, its function is to let in continue running.
It will look small, but it is a very useful component in electrical devices, especially air compressors.

It also enables the motor startup procedure to be faster, instead of waiting around for the device to cool down and be alright for operation.

Its stored energy can enable the compressor motor to increase its torquing power for starting up.

It was invented in 1669 by a Dutch scientist called Hemanth. Since then, it underwent many changes in designs, thus becoming smaller and sturdier.

In-Depth Explanation on What the Air Compressor Motor Capacitor Does

Compressor motors that run on electricity and any other motorized devices derive a large amount of power when they turn on. This process is called “inrush,” which sometimes overextends the circuit capacity resulting from a blown breaker or fuse.

A manufacturer of compressor start capacitors further explains its uses: “A start capacitor is used to briefly shift phase on a start winding in a single phase electric motor to create and increase in torque. Start capacitors possess a very large capacitance value for their size and voltage rating.”

In simpler terms, the capacitor discharges its energy immediately whenever the motor turns on, which allows it to function.
What does the run capacitor do? Its main function is to regulate the voltage and electric current of the device and allow it to continuously run.

If either motor starts and run capacitors malfunctions, the device will not turn on or operate endlessly.

The start and run capacitors are present in all single-phase motors. The start capacitor lets out a powerful burst of energy so that the engine will start. The run capacitor maintains the operational capability of the motor as the first one automatically turns off. The former can store more power than the latter.

Here are the Other functions of a Start Capacitor

When Compressor Motor Capacitor Fails, What Does it Look Like?

It will rupture when it gets busted. The outer housing will melt, and the insides will ooze out. It will look like protruding blisters on the skin.

Here are two signs when it fails:

If you notice that the motor is dragging and exerting itself to turn on, this means the capacitor has lost its capacitance because of wear and tear.

The most likely occurrence why a motor would not start is because of a malfunctioning capacitor. So if you notice this happens to your device, you need to replace it.

What is Capacitance concerning the Air Compressor Capacitor?

It is the determining factor on how much energy a capacitor will store. By comparing it to a glass of water, the larger the glass, the more liquid it can possess. Therefore, the larger the capacitance, the more power it can hold.

Here are three ways to amplify the capacitance:

How to Test a Motor Capacitor

Before installing a new one, perform some tests on it first to see if it is functional.

There are many videos you can view online regarding the step-by-step process, which you can check out or download.

The way to test it is with an analog multimeter or a digital, which is easier to use and more advanced.

You can also use a Voltmeter that focuses on capacitance.

Before using those instruments for testing, ensure it is attached freely from the device.

After testing and the air compressor motor capacitor is truly dead, replace it with a new one and perform testing on it as well.

Then reattach it to the device so that it will resume its air pressuring task.

Getting the Right Compressor Capacitor for You

Acquiring one is going to be an easy process. You do not have to worry. If the component cannot be made to work anymore, check on the old one first to see where it is located. It should have written marks telling the compressor voltage range, which is essential information.

Look for the “MicroFarad” rating and the numerical series that has an “Uf” at the end (it is a MicroFarad symbol). If you cannot read the numbers, just take it with you and show it to the hardware store salesperson.

You have to be sure that the new one is the same and has similar standards as the previous one.

If your device suddenly stops and you think the capacitor is the culprit, look at the other components first like fuses, breakers, contactors, and wiring, as a process of elimination.

Buying a new air compressor capacitor is the right move if you think the current one is defective and causing issues in your device.

The average cost ranges from $130 to $150, while known brands might be more expensive.