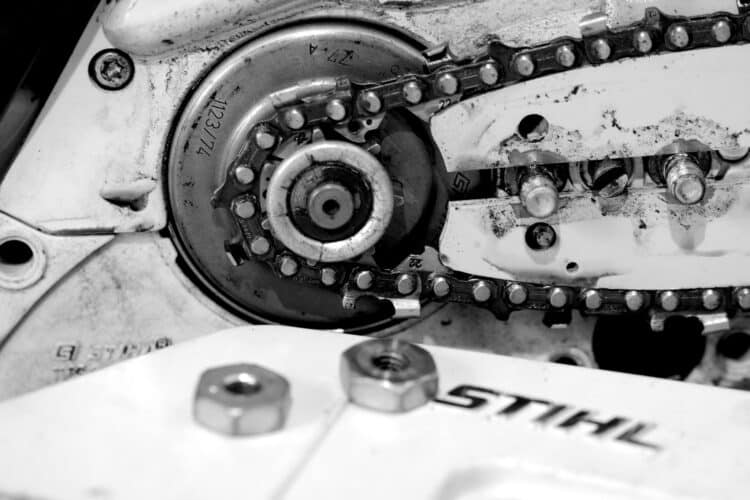 Whether you’re a future owner of a chainsaw doing some research, or you already own a chainsaw, you’re probably here to figure out the different parts of a chainsaw.

It is quite impossible to already own one and give it proper maintenance when you don’t know its parts.

Most chainsaw owners don’t even bother to find out what their chainsaws are made of. And although it may seem unnecessarily complex to learn about the parts of your chainsaw, they will help you in the long run.

A study conducted by the CDC found that there are more than 36,000 injuries related to chainsaws each year. Knowledge of your own chainsaw can prevent injury, and so is wearing the right safety equipment.

First off, every single chainsaw is different. There are different types of chainsaws such as gas chainsaws, and chainsaws that run with electricity (either with a cord or without a cord).

Each brand is unique and have their own little quirks that make them stand out from the rest. This is why there may be some differences when it comes to identifying the parts of a chainsaw.

The best source for you to peruse is your chainsaw’s manual. That should contain enough information specific to your model.

But then again, it might not give you the full scope and importance of a chainsaw part. So this article is going to help you identify the parts of a chainsaw so that you can get to know yours better.

Why should I bother knowing the parts of a chainsaw?

A chainsaw is a complex machine and a useful tool owned by many people. It is basically a controlled saw.

It uses “teeth” with blades at the end, which is attached to a metal chain in order to cut through wood. They are bolted into metal segments that look similar to a bike chain.

It is run by switching on an engine that sends the chain around an aide bar to allow it to cut or slice.

The main purpose of a chainsaw is to cut through wood with less effort on the user’s part, and in a quicker way compared to manual labor with an axe.

Furthermore, chainsaws are not toys. They can be dangerous and deadly when wielded by someone who does not know what they’re doing.

Knowing the different parts your chainsaw has also makes it easier for you to maintain it every now and then.

What does the Occupational Safety and Health Administration say about chainsaws?

The Occupational Safety and Health Administration (OSHA) has decreed that safety standards have to be met with the production of chainsaws.

They require a number of chainsaw parts to be present in every single chainsaw. The also require these to be labelled clearly using bold italic text.

This article will label these parts required by OSHA for your convenience.

What are the parts of a chainsaw?

Again, a chainsaw is made up of different parts that each contribute to its overall performance.

OSHA requires a chainsaw to have specific parts to comply with safety regulations.

These are the parts that OSHA requires every chainsaw to have for safety.

The more fuel the cylinders take in, the faster the throttle runs. In a chainsaw that is battery-operated or uses electricity, the throttle is what decides the “amp” or amperage of the motor.

Similar to the gas chainsaw, the higher the amperage, the more power runs through the chainsaw.

The throttle has a trigger that is usually located below the rear handle.

This part of a chainsaw ensures that the throttle isn’t accidentally activated or switched on. The user has to press it in order to turn on the throttle.

It is usually located at the top of the rear handle. It prevents the throttle from accidentally accelerating.

This is perhaps the most important part of a chainsaw because of its safety implications. The chain catcher is a guard that prevents the chain from hitting the user in case it breaks while in use.

A chain snapping at the speed it’s going around the guide bar is very dangerous and can do a lot of damage without being caught by the chain catcher.

It is usually located under the guide bar near the front of the engine for maximum efficiency.

A chain break stops the chain in its tracks should a kickback ever occur. A kickback is a sudden upward thrust that happens when the nose of the chainsaw comes into contact with anything.

It basically thrusts the blade back to the user and can be deadly without the appropriate safety features such as the chain break and the chain catcher.

This is usually found above the guide bar near the front part of the engine. You should never use a chainsaw that doesn’t have this safety feature nor should you try to remove it.

When you’re cutting into wood, it is normal for debris to fly around. But with the speed the debris is flying at, it these pieces could cause serious injuries.

A handguard protects your hand from the debris and provides extra protection in case of a chain snapping.

It is often combined with the properties of a chain brake, and in most chainsaws, they are shown as one part.

A chainsaw vibrates when it is being used. This vibration can apply tremendous amounts of stress on the user’s body parts, particularly the arms, hands, and joints.

An anti-vibration system instead is designed to be the one to absorb these vibrations instead and is usually found in the middle if the chainsaw next to the engine.

If you think a regular gas chainsaw is too loud, you should try listening to one with a broken muffler—or a chainsaw without one at all.

Even with a pair of earmuffs to protect your eardrums, a gas chainsaw without a muffler would still be too loud to be used comfortably.

These are the parts that make a chainsaw what it is. They may or may not be found in every chainsaw save for the main parts such as the chain, guide bar, chain tensioner, etc.

The chain is what allows the chainsaw to cut through most objects. It is made up of sharp teeth interspersed equally across the entire length of the chain. They may also be a specific width or gauge.

Chainsaws come in different shapes and sizes, and the chain is usually the most noticeable part. Its pitch and gauge affect the way they’re meant to be used.

For example, when cutting firewood, it is important to have a chainsaw that is at least two inches longer than the size of firewood you’re aiming for.

This is the bar of metal that juts out from the chainsaw’s engine where the chain spins on. It keeps the chain in place and makes sure it remains straight while it is in use.

Its length can start as small as 16 inches long to as high as 24 inches.

Similar to a human nose, the nose of a chainsaw is the frontmost part of the guide bar and is usually a rounded edge.

To prevent the chain from springing loose, it is held by a sprocket found by the nose of the chainsaw.

A chain tensioner controls how tight and how loose a chain is around the guide bar. If the chain is too tight, the speed by which it spins around is affected greatly, but if it’s too loose, the chain can fall off while it is in use.

To prevent accidents, make sure your chain tensioner is working properly so that it can observe the proper tension needed to keep your chainsaw safe for use.

The clutch is one of the parts of the chainsaw that regulates the way the chain moves around the guide bar.

A decompression valve does what the name implies, but it is usually found in a gas chainsaw.

When you are first starting up your chainsaw, it will release the compression found in the combustion chamber and allows your chainsaw to start up easily as you pull on the starter rope.

There are more parts of a chainsaw that allows it to be both efficient and safe for use.
Not all chainsaws are the same, and there’s bound to be some models out there that don’t have a decompression valve or other parts listed here.

The first seven parts listed here are the ones that you will find in every single chainsaw because they have been made mandatory by OSHA.

Never attempt to use a chainsaw if you are not familiar with how it works.