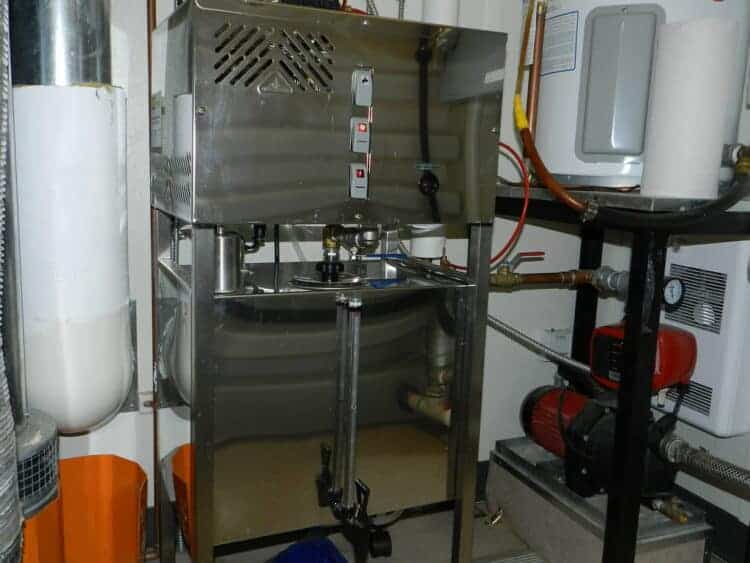 Wouldn’t it be fantastic if you have a whole house water distiller? It is one of the best water purifying methods out there, and imagine if you have one in your home.

You won’t have to worry about any impurities in your tap water if you have a whole house distiller. You can have the benefit of drinking potable, refreshing, and the purest water there is.

Since time immemorial, people have thought of ways to produce and accumulate potable drinking water for themselves. Distillation is regarded as one of the oldest water purifying methods, and until this day, it is still one of the most effective.

If you distill water, the result is vital and clean water. Yet some people will aren’t big fans of its taste. If this happens, you can include some minerals and salts in it.

It, in turn, will make it taste better and also make it healthier for ingestion.

The method of distillation is that liquid substances are differentiated through an exclusive evaporation procedure and succeeded by condensation.

The distillation procedure will lead to two outcomes. The first is that the elements are separated and producing an almost pure product.

And the second is the separation of the elements is only partial, thus enhancing the concentration of some.

In both methods, each process is dependent on the elements’ volatility.

It is the cause of the flatness in its taste. Yet some water distiller filters return the missing minerals to the distilled water. Hence, making the taste better and raising the pH level.

Distilled water’s pH level should be seven, more or less. Yet, in truth, it isn’t that number, exactly. It is because its exposure to air will break up carbon dioxide particles.

If you test the pH level of a regular distilled bottled water after uncapping it, it will always be seven. But after a couple of minutes of air exposure, carbon dioxide will dissolve and turning it a tad acidic.

As confirmed by tests after a few hours of exposure, the pH amount will be about 5.8.

Conductivity means how a particular substance is capable of transmitting electricity, sound, and heat, and its measuring system is done in the unit of Siemens per meter.

Its electrical conductivity is decided by the ratio, between the electric field intensity and the current density. Meanwhile, its resistivity is the direct contrast of it.

For example, the metal with the highest conductivity is silver, which has the formula of 63 x 106 S/m. Pure water is not a good conductor of electricity, and if distilled water is in balance with carbon dioxide in the air, it has a conductivity of 10×10-6 W-1*m-1 (20 dS/m).

Regarding H2O, you might think it is the formula of water, which is partly correct. It refers to purified water, wherein is comprised of an oxygen atom and two hydrogen atoms.

Its ions have H+ and OH-, which alkaline and acid have as necessary elements. It is also the reason it has a seven pH level.

In a typical home, there are two common sources of water:

It is the water that you get from the faucet. It is the type provided for you by your local government, which you pay in the form of a monthly water bill.

This type is safe for drinking because it has undergone a treatment process before reaching your home faucets.

These are the H2O amassed from lakes, rivers, dams, or reservoirs.

Some rural homes that live a distance from known civilization don’t have access to the municipally-treated water supply. So those bucolic and country-bred homeowners resolve to utilize private wells as their primary H2O source.

Since this water type comes from the ground, it is contaminated and may cause sickness if ingested. Its owners have it tested once a year to know if it is safe to drink.

Some well waters are high in iron that enables stains to occur and destroy electrical appliances. So be sure your water softener can handle iron.

Lastly, some well waters have the smell and taste of sulfur, which has the odor of rotten eggs. So be sure your filters can get rid of it.

Why distilled water is good to drink

There are many benefits to your health if you opt to drink distilled water instead of ordinary municipal tap or water coming from a well.

No nitrite or nitrate

Nitrates and nitrites are compounds containing salt, ester of nitrous acid, and many more.

These are contaminants that sometimes find their way to municipal or well-waters. These are particularly harmful to old and young people that can result in, in severe cases, death.

Barium is a kind of pollutant that is always found in your local municipal tap. Ingesting it can result in heart conditions since a scientific study was discovered, which causes high blood pressure in laboratory mice.

Copper is another compound that is always present in municipal and well waters. Drinking it over a long time can result in a heightened danger of contracting Alzheimer’s disease.

Pathogens and disease-causing microorganisms are present in municipal and well waters, but they can be terminated if the water is boiled. Since the distillation does this, you won’t worry about ingesting them, and the steam also doesn’t deliver them to the bottles.

Regarded as the purest

Distilled water is the cleanest water and preferred by worldwide industries that manufacture and process perfumes, medicines, food, and many more. They utilize it because it’s the purest method of filtration.

Drinking it always will flush out harmful toxins in the body. If you want an inexpensive cleansing procedure, ingesting distilled water is the key.

Ingesting it is more inexpensive than purchasing bottled water. Plastic bottles might cause harm due to their chemicals seeping into the water.

What is a household water distiller?

A whole house water distiller is a kind of water treatment method that changes water into steam, then catches and condenses it. The process kills the contaminants. And thus, the final product is pure and freshwater to drink.

An in-home water distiller is a unit made of either metal or plastic, which looks like a piece of appliance in your house. It is similar in appearance to a coffee maker and performs almost the same functioning.

The bottom half of the unit is made from solid material, most likely hard metal. And the top half is the lid where the condensation process happens, which can be unfastened.

You can open up the top of a typical residential water distiller to get to the boiling chamber. It is the area where you can pour water to start the distillation process.

A standard countertop water distillation system is powered by electricity, so look for an area in your home close to an electrical outlet that you can situate and store safely. Once you plug it on, you can use it and drink refreshing distilled water.

What are residential water distillation systems used for?

The main reason for distilled water’s use is, of course, for drinking. However, there are many other things it can be used for:

In the medical profession

In hospitals and other medical facilities where cleanliness is a must, water distillation is utilized to create sterile water, which has a small difference.

Its primary function is to sterilize all medical instruments used in surgical procedures and operations. Doctors and surgeons use it to wash and disinfect their hands before surgery and clean injuries and wounds.

Dentists also use it for their patients to gargle their mouths. And also use it to clean their tools and equipment.

It is also used for laboratory experiments, which makes sure that any experimentation done is not polluted by chemicals and bacteria.

It is also utilized in CPAP machines or continuous positive airway pressure, which is used to help people breathe easily while sleeping. The distilled water is utilized in the machine to make sure there is microorganism buildup.

Water is an integral part of a vehicle’s cooling system. If you pour in regular tap in it, the minerals and chemicals may create corrosion or buildup.

Since distilled water does not have minerals, it makes the car’s internal mechanisms safe and can function in its optimal capacity.

A car battery can be hydrated by distilled water, which makes its lifespan longer, thus aid it to properly charge.

Any canned fruit, legumes, or vegetables you see on the supermarket shelf is supposed to last for a long time. And to enable to do that, distilled water is included in the tin.

This water type keeps the color and nutritional value trapped within. If the tap is used for this, it can change the taste of the goods. It is because of the mineral content.

For baking and cooking

Distilled water especially works well in baking, and compared to tap, absorbs the flour more. It can make the batter creamier and fuller when baked.

This water type won’t cause potatoes to change color while being boiled. It also boils in lower heat compared to a regular tap. Of which can save you time, money, and energy.

If you have an aquarium full of fish, it is not a good idea to use your municipal tap for it because it has chemicals and minerals that might cause impairment and even death to your fishy friends.

Since distilled water doesn’t have those and bacteria in it, it keeps the fish thriving and maintains the aquarium clean.

Also, before pouring it into the tank, check on the pH degree first so you can make sure it is at the right level of seven.

For washing the skin and hair

Your municipal tap is regarded as hard water that has impurities, which wouldn’t work well for hair and skin washing. Lathering soap and shampoo would be difficult to work effectively.

Magnesium and calcium residue won’t be washed away entirely and remain to cling to the hair and skin, which causes them to dry out and lack moisture. Scientific research also concluded that hair loss is caused by the constant washing of hard water.

Since distilled water doesn’t have those impurities, it can clean your body better, and lathering shampoo and soap will be more effective.

How is water distilled?

Water distillers for home use undergo a straightforward process, but it takes a long time. Some household water distillers take up to four to six hours to filter out water that contains one gallon.

It produces distilled water drop by drop, so you have to be patient with it.

Water distillation is one of the oldest, widely used, and efficient water purifying processes ever. Even with recent modern technology that enables other methods to prosper, distillation is still the safest and most beneficial for all people.

So if you plan to purchase a water filtration unit for your home, a countertop water distillation system is the best one to choose for you and your family.