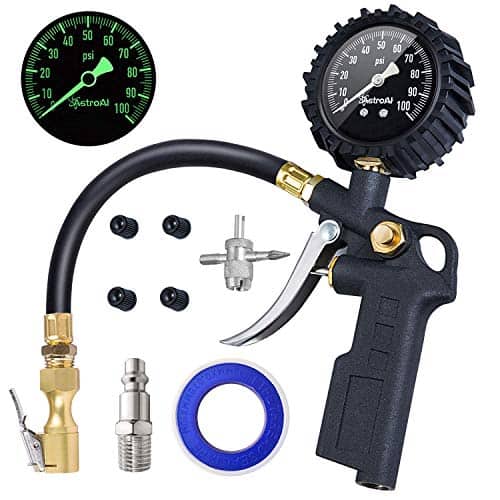 If you are unfamiliar with the terminology of air compressor connectors and couplers, you can understand it better in the context of how electrical sockets work.

Comparatively speaking, the wall socket executes the same task for electricity as these type of fittings does for the air compressor. Both need something to be inserted for the respective current to occur. The cord functions as the passageway for that current to pass, whether it be electricity or air coming from a receptacle, where a plug is inserted.

Due to the similarity with its functionality with electricity, the air compressor fittings have a criterion to follow. If you do not pay attention to them, some issues will happen. It will be not as grievous as mistakenly inserting a 120 voltage plug into a 220 socket, yet similarly troublesome like air leakage, inadequate airflow, etc.

The size of the plug does not pertain to how big it is. It refers to the amount of air it can handle. Here are the measurements: ¼ inches, 3/8 inches, and ½ inches.

The ¼ inch air compressor connectors are the ones usually available for commercial use, so that will be the focus of your attention.

Under this particular size, you will encounter either an automotive or an industrial kind of plug. These are the types available for the public, which can be found in hardware stores like Lowes and Home Depot. You can also find ARO connectors in this size.

There are air compressor hose connectors for larger passage of compressed air currents, like ARO, automotive, and industrial plugs called the “G-style” (these won’t be expounded on and are strictly for FYI purposes only).

The automotive plug-kind is also known as the C-style, the Truflate, and Type T.

The V-style is a kind of air hose plug for a high volume of airflow. This way, it is similar to the industrial type. The difference is it has a bigger opening for the passage of a higher amount of airflow.
The ARO type of plug is also called the type B or the A-style.

In the delivery process of compressed air to the needed destination, the air compressor plug is like the first of the two significant pieces to complete the puzzle (the second is the coupler).

On the air compressor, the air hose plug is fitted into the discharge coupler, which displaces the internal check valve of the air hose coupler. This process will enable the passage of compressed airflow from the tank via the airline coupler, through the plug, which is then connected to an air hose.

Compressed air passes through the air hose, and at the tip of it, there is another air hose coupler attached, which will halt the air from coming out.

Easily detachable air coupler types are the most reliable and quickest means of connecting an air hose with different compressor tools, blowguns, and tire inflators.

You can liken these pneumatic air fitting types to a “container that you can “put inside” the air hose connector.

There are many quick connect air fittings styles which have mostly the same features:

For every air hose quick connect type, there are corresponding compressor hose fittings. If you are looking to buy a particular air hose coupler for your air compressor, then you should also purchase the same style of compressor pipe connectors.

Although some industrial coupler-type can also link up to a V-style connector, it would not work in the proper order. Both would need to link up and match perfectly.

Some confusion may arise because most of the air coupler types look similar externally, so there might be some difficulty in identifying them.

A way for some people to identify them is to count the stripes on the coupler body. Yet this way seldom works for people unfamiliar with this kind of fitting.

For an airline coupler that can seem to fit any compressed air related device or equipment, there is the “universal coupler.” However, a few people have claimed that it can only work with industrial and automotive sort of connector, and some insist it works will all plug kinds, including the ARO types. Some other kinds of universal couplers are not very dependable compared to other specific air hose couplers. They tend for air leakage to occur if some pressure is utilized to the air hose connector.

The Milton V-style coupler is created specifically for high airflow, which will then fit a Hi-Flow connector. It can also link up to M, A, and T style of plugs.

Air coupler types can either be automatic or manual. You can distinguish if it is either one if there is an air hose plug inserted. The automatic one will have the sleeve drawn back while the manual one would remain as it is with the sleeve still fitted.

For the manual coupler, the sleeve can be drawn back to so you can stick in the female air hose connector and make a valid connection. For the automatic plug, you can easily insert both fittings and it will make a connection on its own. For either kind, you still need to pull the sleeve so that the plug can be let go.
Only V-style and a universal are compatible with automatic couplers.

A discharge coupler is the small fitting at the last portion of the pipe from the air compressor’s tank. It prohibits the pressurized air within the tank until the time you will need to use it. It is done this way because it has a one-way internal mechanism that can act to forcibly halt the pressurized air from coming out.

A coupler fitting is normally located on both ends of the airline and also on the discharge portion of the air compressor.

Setting Up the Air Compressor Fittings for Usage

Your air compressor’s discharge coupler more than likely is fitted with a female thread. Internal threads run through until the end of the pipe, which has a male thread that corresponds to the coupler’s internal thread.

Yet, a few air hose coupler types may have a male thread instead of a female thread, which will extend outward of the end portion of the airline coupler. It will then be changed into a female thread within the cylindrical lining on the discharge pipe.

Since air tool connector types should always match with the air hose couplers to be able to link up, they also have female and male threads, which includes a barbed fitting. This attachment makes it possible for the barb to be plugged into a hose. With a compression clamp located on the exterior of the hose, the air hose plug is steadfastly linked to the hose.

An air hose is already fitted with male thread attachments on either end, so for the coupler and connector to be installed properly, both would have to be a female thread.

No matter the type of fitting you have selected, whether it be barbed, female, or male, you need to have the same type of thread on the outside or inside of either air compressor fittings.

Some fabricators have acknowledged that confusion has grown among buyers since there many different kinds of air compressor hose fitting types in the market. They have developed a system wherein paired fittings are designated specific colors.

The Legacy company has followed suit. They adopted a system called “ColorConnex”:

Legacy has declared their system of color-coding is better than others because you can see the difference between lines that do not have oil from the lines that have. A good example is when utilizing a paint sprayer. You want to avoid having extra oil on the air hose. To eliminate further confusion, you can pick green fittings for the spray painting equipment and the color red for the others.

To describe this in easier terms, air hoses function like electrical extension cords, wherein you need the power to travel across a long distance. The connector is like the plug within the extension cord, and the coupler is the electrical receptacle. To get electrical power from one point to another, you need to plug the cord on the wall socket.

A situation may come up that your air compressor’s discharge coupler has been set up already. So you want to get appropriate air pump hose fittings to plug it in so that you can get the air out of the compressor. So, what air quick disconnect types would you use?

To get the right one, you should be aware of the standards that high flow air tool fittings adhere to, which means you need to ask experts on this matter or do a bit of research. If you buy an air hose plug that isn’t the same as the airline coupler’s standard of reference, then they would not fit with each other.

Or, in the instance that they do fit, they might still not be connected securely and may come at a time when it would malfunction.

Upon installation, if the air hose connector chosen is the wrong one for your air compressor, the check valve could not entirely open all the way, and the airflow would be blocked.

A way to avoid confusion in choosing incompatible fittings is to purchase air hose connector kits.

Other kits might be made up of only one air hose coupler and many connectors together. The manufactures had anticipated that people will likely use and install more air compressor hose fittings.

After reading everything, what have you understood from this? More than likely you are utilizing either an industrial or automotive type of couplers and connector. If you want to avoid confusion about what are the right fittings for your air compressor, then you should buy a universal coupler.

If you want to play it safe and avoid making mistakes, pick only one manufacturer that’s reputable for all your accessories and remain with them for the lifespan of your air compressor. It is for the simple reason that fittings from the same fabricator would fit better and not leak air.