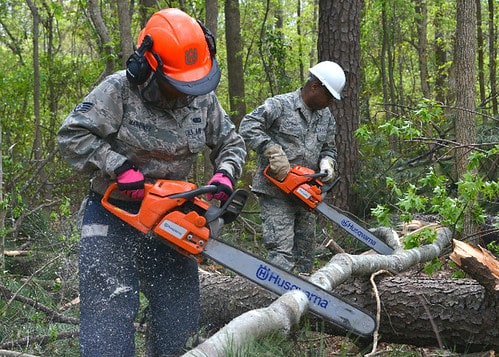 "Air Guard Engineers" by Georgia National Guard is licensed under CC BY 2.0

Does your chainsaw race at idle, and you don’t know why it’s happening? You should find ways to repair it.

After you finish using your chainsaw and let go of the throttle, the ideal course of events would be that the chain would stop turning. What if it would not cease and continue revolving around the bar?

It will bring forth high-risk circumstances, wherein making a regretful decision like moving too quickly can inflict damage to anyone or anything in its proximity.

It highlights how important a chainsaw really is and should be treated carefully and with the respect it rightfully deserves. Even though you regularly maintain it, many extenuating circumstances may occur that will affect it, be it accidentally or coming from the environment.

When you switch on the chainsaw engine, ideally, it should sit in idle mode. And wait until the clutch is engaged. Then it will drive the sprockets and gears to enable the chain to rotate.

Sometimes, when a two-stroke gas engine wasn’t utilized for some time, it will scramble to stay operating and grind to a halt, thus killing it.

How a gas-powered chainsaw works

A typical gas-powered chainsaw is powered by a two-stroke single-cylinder engine that depends on a gas-to-air mixture for power generation. Its carburetor creates the mix that draws in the air via the air filter, which intermingles in a specified ratio with a gas.

Aside from the gas tank’s chief function, it has a fuel filter that sorts out impurities like sawdust from the fuel before it goes through the fuel line and arrives at the carburetor.

Once the mixture reaches the engine’s cylinder, it’s ignited by a spark from the spark plug. Electrical power creates a revolving force that’s directed to the clutch. And enables the chainsaw to run (it’s just the shortened version and is more complicated than this).

Here are few steps you can do if your chainsaw will not idle, or races in idle speed, or won’t keep on running:

If your saw hasn’t been used for a while, any remaining fuel in the tank will cause problems with the filter and fuel line. It will result in gumming up or congestion. Thus the chainsaw won’t idle when hot.

Gasoline with lower octane has higher levels of ethanol that disallows it to remain fresh for long. And will cause corrosion to its seals. Also, the fuel you have acquired from the nearby gas depot has a dirty tank and has harmful sediment at the bottom.

No matter the reason, you can get rid of bad gas by siphoning it from the tank and replace it with fresh and clean fuel.

Experts recommend a fuel with an eighty-nine premium octane rate or even higher, which will allow for clean-burning gas that lasts long.

A typical gas-powered chainsaw has a two-cycle engine that is air-cooled and depends on it to function correctly. If dust and saw particles are mixed with the air, which will clog up the filter, thus compromising it.

The oil that was used for saw lubrication will be mixed with the aforementioned dust will jam up the filter some more, and prohibit it from flowing across its system.

The good thing about it is that you can remove them quite easily. You can use an air compressor to expel out any dirt or grime stuck to it, or you can wash it off with potent detergent soap and water.

After putting in new gas in the chainsaw’s tank, which is coursing through its system and still has issues, it may be due to a congested filter or fuel line.

You won’t have a hard time disassembling and cleaning it, and the price is cheap, so it won’t cause you too much worry since you can easily replace it.

If your chainsaw’s fuel is impure or not fresh anymore, it will cause its spark plug to foul up. It will proceed to become sticky and gummy, thus wreaking havoc on its engine.

A fouled spark plug is likely covered with carbon, which you can fix by cleaning or replacing it. The cost of a spark plug is very cheap, but be sure you’re buying the right one for your saw since different models require their specific sparkplugs.

It would be to your saw’s benefit to check your spark plug’s gap since it will be endangered over time. It will also be advantageous for you to keep a spare plug handy, which you’ll be able to replace if needed.

If your particular saw model has a primer bulb, it can become covered with oil and fuel, turning it gummy over a period. It can also wear out the seal and make it bad, which will develop small slits and makes air exit.

It means that there isn’t a good flow of air, and too much of it is incorporated into the saw’s engine that hinders its ability for idle speed.

You saw has idle ports or screws that need adjustment to enable airflow in its engine. Oil, grime, and dirt can obstruct these tiny gaps that are capable of cutting all air from the engine.

It enables the engine to operate improperly and even kill it once in an idle setting or full blast.

These screw types enable the flow of air into the engine. The screws of most chainsaw models have been pre-adjusted and don’t need fine-tuning anymore.

Yet, you have to fine-tune these screws to enable your carburetor to function correctly.

If your saw is subjected to too much air that passes through the engine, it will run very rich, enable it to smoke, have insufficient power, malfunctioning your idle setting, and causing all sorts of issues.

It will all carbon buildup and congest the other components, thus making more trouble. If its engine runs lean, it means insufficient air is coursing through its system, producing weak power and making the whole saw hot. All of these can result in a tour chainsaw having an engine seizure.

Most chainsaw models have three screws adjustable screws: one to adjust its high speed, another for low speed, and the third for adjusting the idle or throttle.

These screws manage how the throttle valve remains open once the trigger is discharged. If adjusted to the low speed, the engine will cease to function upon release of the throttle.

If the speed is set to idle and high, it will continuously run the chainsaw chain that causes safety concerns.

Adjusting for low speed has a marking with the letter L for low. It manages the quantity of air incorporated with gas at idle mode. It doesn’t matter if you twist it too high or low. It will make the engine cease running at idle speed.

Adjusting for high speed has an H marking for high and controls the rations for fuel and air at sawing speed. If the ratio for both is too rich, its engine won’t attain full power in RPM or revolutions per minute.

If it’s adjusted too lean, it may result in the engine to seize up or fail, run hot, and lacking power.

Adjusting these types of screws should be done in a sensitive fashion and with utmost care. Don’t set them too tightly, and your saw will work out properly.

To begin the adjustment procedure, gently screw each one in and be sure it’s only one click going backward. Before starting up the chainsaw, be sure its fuel tank has about one-half tank of gas, and the filters are wiped clean.

After the saw is on, let it be in idle mode for a few minutes to warm up the engine. You can do this if you squeeze and release the idle screw repeatedly.

After warming up the engine, set the idle mode to the highest lever, without the clutch being engaged yet (in a tachometer, it’s supposed to 2.7k RPM).

Adjust the screw for low speed by twisting it slowly until the chainsaw engine is starved of gas, and turn it slowly again until it has loaded up. Fine-tune it a couple of times more to where it sounds alright, which is in the middle portion of the setting.

Get back to the idle screw and tweak it also. Go backward and forward between the two until you feel it’s in the correct functionality. If you master the two screws, you don’t need to adjust the high-speed one anymore.

Since the two-stroke engine of a typical chainsaw can be easily diagnosed, and if it races or dies at idle speed, it can be remedied immediately. There are a couple of quick solutions that can be addressed by regular maintenance, and if the problem persists, you can nail down the problem.

If your chainsaw’s carburetor needs to be recalibrated, the abovementioned steps are quite simple to undertake. But it requires a steady hand and a good amount of patience and elbow grease.

Listen to your chainsaw’s engine, and if it doesn’t sound right, something needs to be done.