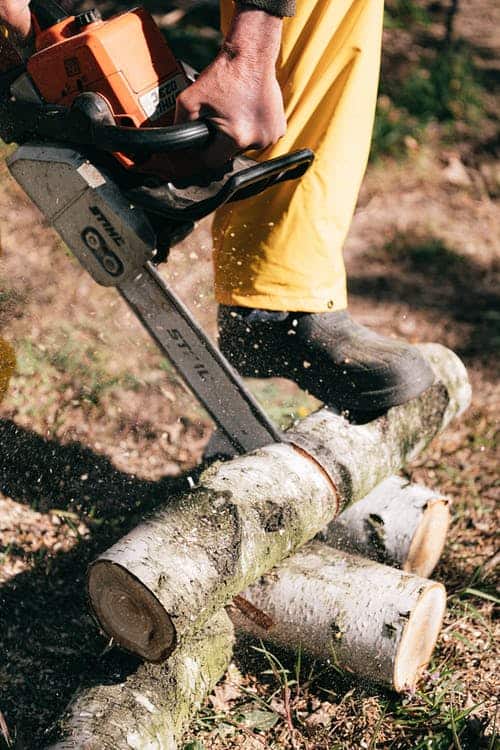 What is a carburetor?

Unlike other carburetors in other engines, the carburetor on the chainsaw works only in three situations. They include:

The chainsaw carburetor has to work when:

The main parts of a carburetor

It is crucial to know the main components/parts of the carburetor if you want to know how to tune a chainsaw carburetor. It is easier to fix something when you understand its parts. Before we look at the main parts of a carburetor, please note that a carburetor is a tube.

The main parts of the carburetor include the following.

Bearing in mind that a carburetor is a tube, it is composed of a brass throttle plate across the chute. The work of the throttle plate is to control the amount of air that flows through the tube. There is also a narrowing inside the duct whose job is to create a vacuum. The narrowing is called a venturi. Within the venturi, there is a hole known as a jet whose work is to allow the vacuum to draw in the fuel.

This hole is known as the idle jet. The other crew labeled (LO) regulates the amount of gas that passes through the idle jet. What happens when the engine is cold? Starting a cold engine requires one to pull the cord to start the engine. When the engine starts running, it is said to be running at a very low rpm. To run a cold engine, the carburetor needs to have a rich mixture to start. Get a choke plate at this stage.

An adjustment that is too strong can cause the chain to emit too much smoke. It can also result in insufficient power and lead to too much buildup of carbon. The engine of the machine can get destroyed as a result.

A strong carburetor adjustment occurs when the portion of the fuel in the combustible air/fuel mixture is very high and prevents the fuel from burning well. As a result, not enough heat comes out, and this may result in a weak stroke. Since the mixture does not burn well, excess smoke is produced through the muffler. A strong carburetor also causes excess carbon buildup. If you run the engine for a long time, the excess carbon covers the cylinder ports as well as the fire screen. The same effect can also be achieved when one uses old gasoline or when you mix too much oil with the fuel.

A weak/lean carburetor adjustment occurs when the part of fuel in the combustible fuel/air mixture is not sufficient to burn. As a result, there will be weak power stroke and this may be responsible for insufficient power. Apart from low power, there are chances of seizures due to high temperatures in the cylinder. Other factors may contribute to the lean adjustment conditions. An example is an insufficient oil in the gasoline mixture. If you leave the fuel tank to run empty, the carburetor may experience this condition. Check your user manual to learn about the correct oil mixture ratio you should use.

Steps to take to tune a chainsaw carburetor

The first step is to check the air filter. Sometimes the air filter could be dirty and needs to be cleaned up. Failure to clean the filter is not a good idea because you might end up tuning the carburetor with a dirty filter. Makes sure you clean all the dirt clogs before you tune the carburetor.

Open and fill the fuel tank

Once you have cleaned the filter, it is now time to open the fuel tank and check its level. Before you proceed, you have to ensure that the fuel tank is more than 1/2 full. It is critical because you are going to use fuel during the tuning process. Undertaking the adjustment with a low fuel may lead to a carburetor that is too adjusted when you decide to refill the tank. Make sure you run the engine for some time if it is cold to avoid a situation where you are getting a rich adjustment when you start the engine without warming it up.

If you want to run the chainsaw at low speed, adjust the screws by turning them inwards. It will let the engine starve from fuel. Once that is done, it is time to let the engine run faster by turning the screw outward. You can then start loading it up. The best screw position should be between the second and first positions. It is probably where the machine is idling best.

If you want the chainsaw to run at high speed, adjust the screw by turning them inwards. It will help you to achieve a lean mixture. Now turn the screw inwards further. You should hear aflutter. Use your tachometer to see whether you have found the correct RPM.

Now the carburetor to your chainsaw is fully tuned and ready to be used.

One question that people ask is: why can’t carburetors be permanently set while they are new?

Well, it is not possible for carburetors to not need any tuning at all. You cannot adjust them when they are new and then forget about tuning the carburetor for the rest of its life for a simple reason. Chainsaws can’t be set at the factor level and stay perfectly tuned thereafter. Because of differences in fuel types, elevation, humidity, fuel age, and general wear and tear of components on the saw, carburetors need frequent tuning and adjustment to continue operating well.

When tuning your carburetor, you must ensure that the chainsaw is laying on a flat surface. Slant surfaces can be a problem because they spill the gas from the carburetor or make the machine fall. Ensure to clear any extra items around. Pay particular attention to the chain area. You don’t want accidents or anything to entangle on the chain. This can destroy the item or the chain blade during the adjustment process.

As a precautionary measure, protect your hands with leather gloves and other protective gear. Wearing an overall and a long-sleeved shirt also helps. Chainsaws can cause accidents and one needs to be extremely careful. Make sure there are no children around.

A carburetor adjustment is necessary and you are going to need one. All chainsaw carburetors need tuning at one point. So you should learn how to adjust the carburetor properly on your own. It is not a complicated thing if you follow the above instructions to the letter. If you need your chainsaw to continue performing at its best, then periodic adjustment of the carburetor is necessary.