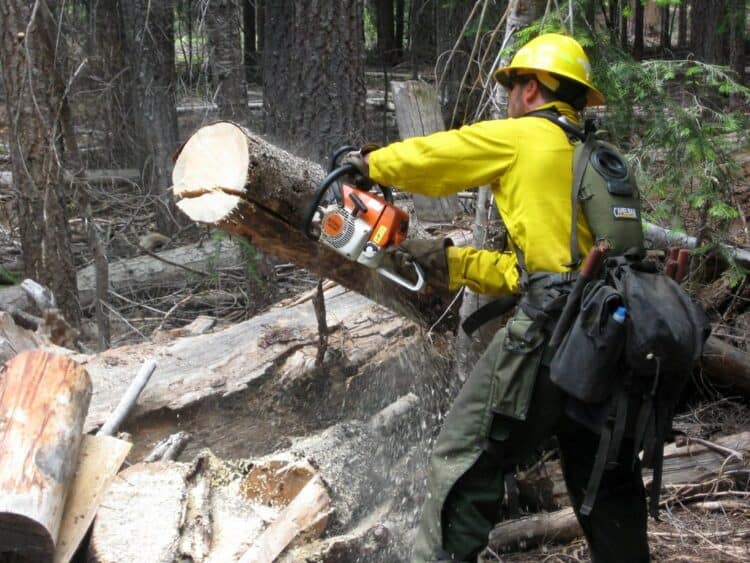 "Chainsaw Training" by H Dragon is licensed under CC BY 2.0

Are you wondering how many decibels is a chainsaw to your hearing? Is it that loud that can affect your ability to hear?

If you have used a chainsaw or even happened to be in its proximity, you know how loud it can get. Even at idle speed, the sound produced is still too noisy for comfort.

Even more, if it’s used to saw a thick hardwood trunk, the sound might even be considered unbearable to some. People close to it and even the person using it will be wearing some form of protection for the ears to prevent any unforeseeable damage to their hearing.

You will learn many things in this article, like how to protect yourself from sound. Or how many decibels is a concrete saw, or even what sound does a saw makes. It will invariably help you to deal with a potentially ear-shattering sound a chainsaw makes, which can cause long-lasting injury to your hearing.

How does our hearing work?

The body of a human being is a fantastic and complex biological mechanism akin to moving parts in a machine. More so concerning hearing, where complicated situations occur that enables your ears to catch sound waves.

A person’s auditory system comprises of outer hears (which are jutting out and the ones everyone can see), middle and inner ears that link to the brain. Thus, enabling the processing of sounds for hearing.

Sound vibrations enter the outer ear and go through a narrow gap to reach the middle ear. And there, it will proceed to vibrate the eardrum.

There are tiny bones called ossicles behind the eardrum that responds to the vibrations and enables them to course through to the inner ear.

There’s a cochlea in the middle ear that transforms the vibrating sound into nerve impulses. The cochlea has specially designed hair cells that allow it to do exactly that.

The impulses go through the auditory nerves towards the brain. It then enables a person to process them. And that is how a regular person’s hearing works.

What is the decibel threshold of pain in an average person? To learn about that, you should know first about decibels, which is the unit of measurement with sound.

The decibels’ measurement will establish the noise thresholds that are regarded as safe. It will also correlate to the duration of time a person is exposed to it.

If the decibel level is high, the more injury it causes to the inner and middle ear. Then it will lead to hearing impairment, either temporary or permanent basis.

The sound produced by one person or a group of people has about sixty to seventy decibels. These noises are not consistent in their power and slowly rises and fall, which doesn’t cause any damage.

A loud live concert has about one hundred five to one hundred fifteen decibels and is deemed to be inconsistent. However, small children have more sensitive hearing and may need ear protection since it is sixteen times louder than a normal conversation.

The threshold of pain is about one hundred twenty decibels and above, and some think it’s much lower. An eardrum-shattering sound is at one hundred fifty decibels, and even in short sound bursts can still cause the same injury to the ears.

A good way to become aware of potentially damaging sound is to be closely attentive to warning signs that affect one’s hearing. Here are some symptoms:

A person will lose his/her hearing due to constant loud noises or being repeatedly exposed to moderate sound levels over long periods. Wearing ear protectors like earmuffs will hinder damage from either moderate-to-loud noises.

If you are constantly exposed to loud noise all the time, you have to take measures to protect yourself.

Here are some people that may be in danger of being exposed to too many loud noises:

Ringing in your ears

It usually happens after attending a specially loud concert or after driving an open cab tractor for many hours. You will hear a ringing sound that won’t stop for one to two hours. What if the ringing won’t go away and will remain like an unanswered phone call in your ears?

The unceasing ringing sound in the ears is called tinnitus. Some will hear the typical ringing sound, but some people will be hearing whistling hissing, roaring, clicking, or chirping sounds. It’s the precursor before you’ll lose hearing entirely. So if this happens to you, consult a specialist immediately.

How many decibels is a chainsaw?

What noise does a chainsaw make?

A typical gas-powered chainsaw’s noise comes from its two-cycle engine and in congruence with the spinning chains.

Whereas, an electric chainsaw’s noise output is much lower. And is ideal for homeowners living in close-knit neighborhoods where loud noises can be an issue. Some newer models have a built-in feature that’s capable of muffling its sound, creating a much more tolerable noise.

The noise the chainsaw produces is categorized under chainsaw safety since it can create a powerful sound that causes potential injury to others.

Chainsaw models are available in different types, and their noise levels are based on each of their strengths and designs. As mentioned earlier, newer electric types produce lower sound, and some have specially designed noise mufflers.

These newer models have about one hundred six decibels, which people can endure and not regard as noise pollution. However, it’s still louder than people talking.

Average gas-powered and heavy-duty chainsaws produce around one hundred twenty decibels of ear-shattering sound and are thirty-two times louder than conversing people. It can also cause hearing loss if exposure is too much.

The loud chainsaw noise produced is more or less within the threshold of the pain decibel level. At this stage, ear protection is recommended at all times.

Even if it isn’t a hellish experience, the perpetual sound vibration will inflict injury to a person’s eardrum. It can result in long-term hearing loss.

How do you lose your hearing?

The loss of hearing does not happen instantly, but gradually over a long period with constant loud noises. It will create wear and tear effect to the middle and inner ear.

Other people will notice this first from the particular hearing-impaired person before he or she does. That person can only get bits of the conversation, and catching attention might prove to be a difficult thing to do.

Since the pain sensation threshold is at one hundred ten to one hundred twenty decibels, you might think there will be no need for ear protection yet. Since you can still tolerate and manage it, even though you feel discomfited.

However, you should be aware that eighty-five decibels of sound might still be tolerable but can wear out the hearing if done constantly. So it’s crucial to know about the noise levels you’re being exposed to.

Lastly, remember this: it will take one hour for ninety-four decibels of noise to wear down your hearing, yet two minutes at one hundred nine decibels.

Protecting one’s hearing should always be imposed whenever utilizing a chainsaw, even with newfangled noise-reducing features. The muffling capabilities are more directed to the people nearby rather than the person using it, which is at risk.

Soft earbuds are not effective for long periods of loud chainsaw noise. The best ear protection is earmuffs.

Earmuffs can significantly decrease the noise to an acceptable and tolerable eight to eighty-five-decibel level. However, like all things, the potency of earmuffs doesn’t last forever, and cushioning will disintegrate. Also, not all earmuffs are made the same way.

The effectiveness of earmuffs is based on how good or bad they can suppress sound. It should dampen enough noise to reach eighty-five decibels. So you have to consider a couple of things, like how long it will be running and how many decibels were taken out.

The earmuffs’ rating is called attenuation. It is the product of a mathematical equation wherein a particular amount of sound is emitted in decibels and subtracting eighty-five decibels (the tolerable amount produced) from it.

An example is a typical chainsaws decibel amount produced is one hundred ten, subtract eighty-five from it, so twenty-five is left, which is the attenuation rating.

You can use earmuffs with a low attenuation rating, but you have to take into consideration the duration of exposure to the noise. If you are only exposed to the loud noise for a couple of minutes per day, the risk of hearing loss is very minimal compared to a professional logger who uses a chainsaw for six hours daily.

A chainsaw’s loud noise isn’t the only thing risky about it, there’s also a potential hazard from its vibration. Some of the newer saw models already have a vibration reduction feature. Despite that, your body is continually resisting its powerful force and tenses it up.

Most regular people don’t use chainsaws regularly, and if they do, it’s only for a short while. But if you’re one of the select few who does use it every day, you should know the risks involved of perpetual vibration to your whole body.

Even if though you might feel fine, your health will suffer in the long run.

HAV, or hand-arm vibration is what happens to people that continually use vibrating tools. The hands are the bodily parts that are damaged the most and creates circulation issues because of the kind of grip from the tool.

Additional injury is inflicted to the muscles, nerves, and tendons, which leads to the carpal-tunnel syndrome.

Besides the earmuffs, there is no other effective form of protective equipment that can lessen the danger. However, knowledge about the harmful effects of loud sounds can make a huge difference.

Also, you now know what types of chainsaws to choose if you only need them for part-time residential purposes: electricity-based, with noise and vibration reduction features.

Also, keep your ears protected with thick, good-quality earmuffs, which allows the chainsaw’s loud screeching noise to be tolerable. Remember to take breaks once in a while. And flex your upper body parts before and after using a chainsaw.

Another way to reduce noise is to keep your chainsaw in good condition. Replace any worn-out, unbalanced, or loose components that can potentially cause louder noise.

Keep the chainsaw well-maintained and oiled properly. If you’ve been meaning to substitute the worn-out muffler, do it as soon as possible.

If you are only a bystander from the chainsaw task, keep your exposure at a bare minimum. Find ways to block the noise from your precious hearing.

If you feel that your hearing isn’t what it used to be, consult a specialist immediately.

You have to accept the fact that, for a chainsaw to function in optimal capacity, it has to produce an extremely loud noise. So you have to be aware of who you might be inconveniencing and try to become as considerate as possible.

For yourself, make sure you wear protective gear and always be mindful of your surroundings. The chainsaw is a potentially life-threatening tool, so handle it with care.